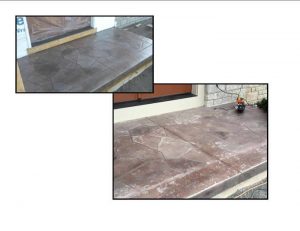 Unfortunately, Winter weather can wreak havoc on exterior concrete slabs.  Scenes like the those illustrated below are far too common to see as the snow melts.  In part one of this series, we’ll look at the three primary culprits that attack our concrete work… Scalling, Spalling, and Cracking.

Philadelphia Metro and much of the Northeast and beyond, as of mid-January 2014, has experienced a wild winter already, with still 2 months to go before the calendar says that Spring is in the air.  With temperature swings of 60 degrees F over less than  5 days, we’ve had January highs in the 60’s and frequent lows nearing 0.  Moreover, every single week of this winter has produced snowfall, in some instances yielding more than a foot of accumulation.  What does this matter to all of us, or at least to those of us who don’t operate a plow?

Just about everything that lives outside in such conditions will suffer aches and pains, and concrete is far from an exemption.  Salts and de-icing products litter our roads, our walkways, driveways, and even tread their way onto our floors.  Snow-blowers, plows and shovels scrape our concrete that surrounds our homes or places of business.  The drastic temperature swings induce frequent freeze and thaw cycles, which, when complemented with moisture, can brutally assault our concrete slabs without prejudice.  While controlling the weather is beyond your skills, you can still learn how it affects your work and how you can take preventive measures and/or make sensible repairs.  More will follow in this e-series on prevention and restoration, but lets start by getting to know our assailants and how they arrive.

Scaling is the world’s single-most common form of damage that affects exterior concrete slabs.  It is the delamination of a thin layer of the concrete’s surface.  At times, this can look like peeling of thin sheets or small “scales.”  This is generally differentiated from spalling based on the depth of the damage.  Scaling is likely to occur somewhere “mid-slab” or away from joints or edges, though this is not absolute.  Scaling can affect the surface in such a thin layer, that the depth is thinner than a mil (1/1000th of an inch – thinner than a sheet of paper).  It can also get down into the surface much more deeply; exposing both fine and coarse aggregate within the upper layers of the concrete.

In mild cases, scaling may be so superficial, that you can only notice lightly colored freckles over the surface of the concrete.  Painted, sealed, colored, and stained concrete surfaces affected by scaling will likely be visible as white or light spots as the material that was on top has been removed with the delamination caused by scaling.  This is commonly noted on stamped concrete, especially with topically-applied coloring products, such as color hardeners and release powders/antiquing.  Sealer, which often provides a “wet look” will have scaled off as well.

While there can be many factors that contribute toward scaling, and many degrees to which scaling can occur, we’ll focus in on the most common related causes.  While scaling rarely shows its face until it gets exposed by a combination of sub-freezing temperatures, moisture, and temperature fluctuation above and below the freezing point (freeze-thaw cycling), the root cause has most often occurred much earlier.  Water-cement ratio within the concrete mix, addition of water to the batch, finishing practices, curing conditions, and air-entrainment all play vital roles in the formation of (or prevention of) scaling.  Road salts and many consumer-grade de-icing chemicals accelerate scaling problems as well.

Spalling is a term well-known to most concrete installers as the industry’s most infamous bad guy.  Spalling is a form of damage to the concrete’s surface that extends deeply into the slab, clearly and extensively exposing coarse aggregate.  Spalling is commonly found at joints, cracks, and edges, though it, too, can appear “mid-slab.”  In most cases, spalling is anything but superficial, occurring at depths from 1/8″ to several inches deep into the slab or structure.

Many of the potential causes of spalling are similar to those of scaling, although the problems are usually compounded by negligence or disregard for prudent design.  Expansion and control joints are typically engineered to allow for substrate movement to occur without damages.  When movement at a joint exceeds tolerance, the adjacent sections of a slab may be forced to shift and/or contact.  Spalling and/or cracking is almost a foregone conclusion when this happens.  As freeze-thaw cycling induces an increase in expansion and contraction, the opportunity for spalling increases as well.

Spalling is not entirely based on substrate movement.  It can form much the same as scaling issues do.  However, the underlying causes are typically more severe.  Factors such as high water-cement ratio, low air-entrainment or poor finishing practices can lead to spalling.  Spalling can also be caused by a failure to address scaling issues.  Such negligence can progress quickly, given the right conditions.  What may be worse is that spalling can be extensive long before its visibly-evident.  It’s not terribly rare to hear of cases that continue to worsen after repair.  Tools such as a DDT (Delamination Detection Tool), dragging-chain, and engineer’s hammer are used to discover sub-surface spalling that is not yet visible.  Failure to detect and repair these issues can eventually spread to become a larger scale sheet-delamination issue that can be nearly irreparable. 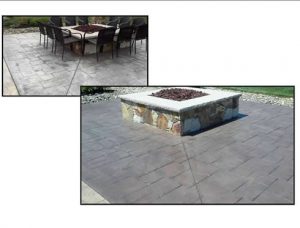 There are two types of concrete in this world:  concrete that has cracked and concrete that will crack.  It’s a combination of science and luck that helps us control where these cracks will occur.  Cracks come in all shapes and sizes but need not be defined by characteristics.  Some may speculate that specific cracks occur due to shrinkage or settlement but let’s start with the basic idea of a crack is a crack.  I’ll assume we all know one when we see it.  Now, assessing how it may have occurred is a different challenge. Pouring concrete late in the season carries the added risk of subjecting uncured concrete to freezing temperatures and freeze-thaw cycling.  This can be a brutal disturbance to the hydration process and, ultimately lead to developmental deficiencies, which may result in many forms of damage, including cracking in unplanned locations.  Even well-cured concrete slabs will be subject to the more abusive conditions of winter.

So, imagining that you took all proper steps with regard to joint design, sub-base preparation, and reinforcement, a crack still forms right where it will be most offensive.  “It was fine when it was poured in October, but it couldn’t even hold out until Spring.”  Of course this happens on your biggest job of the year.  If this hasn’t happened to you, be prepared for it because it will.  So, WHY?  It could be the result of contraction.  Control joints and expansion joints must be engineered properly for good crack control.  As temperatures increase, concrete expands (as do nearly all building materials), making it necessary to include room for this to occur and to further prevent damage.  We call this extra “room” in concrete an expansion joint.  This is merely a space between slabs or another structure that is large enough to allow for material expansion but prevent them from contacting each other.  Used improperly, it generally leads to spalling.  But what happens when concrete gets cold…of course it shrinks, or contracts.

Ever hear of a contraction joint?  Probably not!  There is no way to create a contraction joint to allow concrete to shrink and prevent damage, so the nearest alternative is a “control joint.”  This control joint is our way of conceding that contraction, or shrinking, will cause damage … a crack.  So, we create relief within the slab by cutting a line in it at sensible points.  Based on size, thickness, and design, we may be able to determine the best areas to create relief (areas where cracks would be most likely to form).  Later in this series, we’ll talk more about how this is mathematically determined.  For now, we’ll simply have to concede that cold causes contraction, which further causes cracking.  If we are both good and a little bit lucky, we can create control joints in advance that allow for these cracks to form cleanly.  Nevertheless, in this business you will need to know that winter can win the battle and cracks may form as they want even when you do your job well on that end.

Stay tuned for more on preventing, and subsequently repairing these types of damage.  Keep a positive approach when dealing with the misfortune of winter-time damages on your work … there are many ways to get your work back to good form in most cases.